Long interview with Stefan (in German) on www.rocktimes.de

Posted on 15. March 2010 by Michael| Comments Off on Long interview with Stefan (in German) on www.rocktimes.de

For those of you who don’t want to play around with online translators and/or are just interested in the news contained in the interview, here’s what Stefan says at the end:

Yes, we’d like to play live, but that’s still in the planning phase. And a second Relocator CD is definitely coming and will probably be released in 2011.

Comments Off on Long interview with Stefan (in German) on www.rocktimes.de

our album is now also available from the iTunes Store. 🙂
http://itunes.apple.com/us/artist/relocator/id354852393

Please note however that we make more from direct sales via our online store where we also offer a FLAC version at no extra cost.

Comments Off on Now also on iTunes! :)

Posted on 5. February 2010 by Michael| Comments Off on Relocator debut album now available from CDBaby! :)

Our debut album is now available from CDBaby:
http://www.cdbaby.com/cd/relocator

This is quite a bit cheaper and quicker than ordering directly from us if you live in the USA or Canada! 🙂

Comments Off on Relocator debut album now available from CDBaby! :)

Posted on 25. January 2010 by Michael| Comments Off on Relocator CDs finally available!

No more delays – the final Relocator CDs have arrived and are now available from our online store!

Don’t forget that our flat rate CD price includes shipping costs to wherever in the world you live.

The initial batch of pre-orders was shipped today and is on the way to Relocator fans all over the world – to countries as far away as the USA, Canada, New Zealand, Australia and Japan! We thank everyone who pre-ordered the CD and apologize one more time for keeping you waiting. We hope our “instant MP3 download” offer made the wait for the CD easier. 🙂

If you didn’t pre-order, just head over to our online store now! 🙂

CD release set for January 25th, the first reviews are in!

Posted on 15. January 2010 by Michael| Comments Off on CD release set for January 25th, the first reviews are in!

We finally have a new release date for the CD: January 25th! 🙂
We apologize for the delay to all who have pre-ordered the CD.

The first English review of our album has been posted here:
http://www.ytsejam.com/modules.php?name=Reviews&rop=showcontent&id=1680

If you speak German, you can read two more reviews here:
http://www.rocktimes.de/gesamt/r/relocator/same.html
http://www.babyblaue-seiten.de/album_10425.html

And remember, the full album is available for streaming on our MySpace page!

Check it out if you haven’t yet! 🙂

Comments Off on CD release set for January 25th, the first reviews are in!

Posted on 30. December 2009 by Michael| Comments Off on CD release update

The final Relocator CDs arrived from the pressing plant today just as scheduled. And yet we can’t ship them yet – unfortunately the layout of the CD booklet is totally messed up as you can see in the comparison image below. 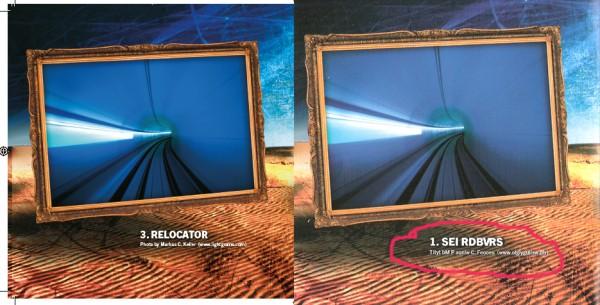 How did this happen? We have no idea at this point. We are still waiting for an explanation from the pressing plant and a solution for this unfortunate situation or some kind of schedule for replacements. At least the CDs themselves seem to be fine…

We are sorry for this delay and we’ll keep you updated. Thanks for your patience!

Comments Off on CD release update

Posted on 25. December 2009 by Michael| Comments Off on Now streaming the full album on MySpace!

We have now uploaded our entire debut album to our MySpace site. Still no reviews out there that people could go by, so we’ve decided we’d just let everyone find out for themselves if they like the full album as much as the individual tracks and sample medleys that were previously available.

Check it out and let us know what you think! 🙂

And Merry Christmas, everyone!

Comments Off on Now streaming the full album on MySpace!

it’s been a bit quiet since our big announcement in October, but thankfully
the long wait is now over – the Relocator debut album is done and it’s OUT!

We won’t have the physical CDs in our hands for another two weeks or so,
but if you want to hear the album now, you don’t have to wait until then!
We are now offering high-quality mp3s of the full album (complemented by
the CD booklet in PDF format so you’re not missing out on the liner notes).
We have also started taking CD pre-orders and the cool thing is: If you
pre-order the CD, you can download the mp3s and start listening right away!

Here’s the cover and the tracklisting: 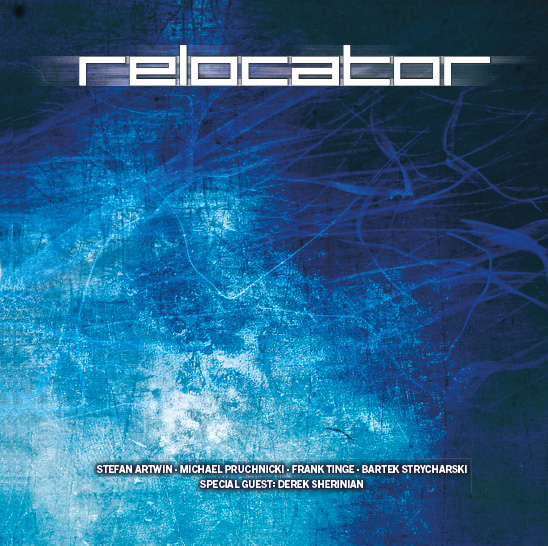 You can listen to two full tracks on our MySpace page.
We will upload a new track every day until the end
of the week, so keep checking back and listening. 🙂

Note: We had to split one song into two parts due to the MySpace limits.
On the album it is of course presented as one track without interruption.

Posted on 18. October 2009 by Michael| Comments Off on More samples added, now featuring our violinist

As announced last week, we have more preview material available today. The new medley shows another side of our debut album, featuring electric violinist Bartek Strycharski quite prominently. But the focus is not only on Bartek – it’s not every day that you get to hear Derek Sherinian on piano! And of course there’s also a healthy amount of “regular” spacey prog in there so things don’t get too one-sided.
Both sample medleys are available as high-quality mp3 downloads:

Comments Off on More samples added, now featuring our violinist

Posted on 11. October 2009 by Michael| Comments Off on Relocator debut album coming this November

We’ve been dying to share this piece of information with you for months, but we wanted to have some audio samples of the near-finished album ready to go along with this press release. But today the time has finally come:

Influenced by both modern and classic artists like UK, Planet X, Rush and Allan Holdsworth, Relocator have developed their own purely instrumental style. After a transformation from an unstable “full” local band into an international project, Relocator are finally about to deliver their long-overdue first album that is as uncompromising in its progressive approach as it is melodic and accessible.

Adding his distinctive keyboard style to the Relocator debut is special guest star Derek Sherinian. Derek played with rock legends Kiss and Alice Cooper even before really stepping into the spotlight during his four years with progressive metal titans Dream Theater. More recently he has become known for a string of exciting solo albums, each featuring some of the world’s most famous guitarists, and for his live and studio work with Billy Idol and Yngwie Malmsteen.

Instead of just contributing a few guest solos, Derek Sherinian has recorded all keyboard parts for the album. Derek’s experience with the self-proclaimed “sickest instrumental band in the world”, Planet X, makes his style a perfect fit for the music. “We are thrilled to have Derek’s amazing array of modern keyboard sounds featured on our album!”, says guitarist and main composer Stefan Artwin. “The original 2008 album that never got finished would have featured just a few Derek Sherinian solos over tracks with MIDI keys and mostly synth bass. So when we decided to re-approach the material, getting Derek involved more extensively was one of the steps we took to take the music to a new level.”

Another step was to enlist the talents of Dutch drummer Frank Tinge from the band Superbug (http://www.superbug.nl). “We wanted someone who could not only play this kind of challenging music with its twists and turns, but who would also show some real enthusiasm for our musical style”, says bassist Michael Pruchnicki. “Frank was my first idea and he turned out to be the perfect choice!”

Self-described “rock violinist” Bartek Strycharski became the last addition to the project. “With Frank and Derek on board the music became heavier, so we wanted to have some acoustic elements as a balance to all the spacey progressive parts”, Pruchnicki explains. “One idea was to have Frank play some African percussion on one track. The other was to add Bartek’s electric violin as another expressive instrumental voice. He’s one of the most talented and natural musicians I have ever met and his playing really added a new dimension to our music.”

The self-titled Relocator debut will be available directly from the band as CD or digital download, other distribution channels will be announced soon.

A five minute sample medley from the upcoming album is now available on these websites:
http://www.myspace.com/relocatorproject
http://www.relocator-project.com
(for a high-quality mp3 download of the medley)

A second medley showcasing the talents of violinist Bartek Strycharski will be released later this month. Stay tuned for more preview material leading up to the release – including complete tracks!

Yes indeed, we will have more (much more!) preview material available very soon. If you’re interested in our guest violinist, why don’t you check out his web page for the time being:
http://ovca.republika.pl/english.htm

It’s a bit outdated, but it features several excellent samples of his playing with his former Polish band Borderline under “Music”.

So let us know what you think of our little five minute appetizer medley and spread the word if you like it! And remember that a high-quality mp3 download of the medley is available here: Relocator Sample Medley 1

Comments Off on Relocator debut album coming this November