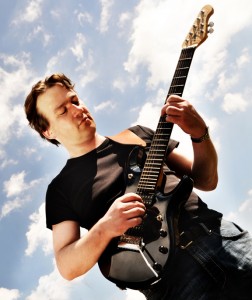 Stefan Artwin was born in Germany and began playing guitar at age 12 after hearing a radio show featuring Jimi Hendrix.
After a few years of initial lessons he continued to teach himself and started to play in different bands. During this time he became influenced by various music styles like jazz, blues, funk or fusion, and his guitar style expanded to more diverse styles such as Al Di Meola, Allan Holdsworth, Edward Van Halen, Steve Vai, Joe Satriani and Yngwie Malmsteen.

Besides playing guitar, Stefan got more and more interested in composing and arrangement and expanded his knowledge to jazz, fusion and classical music. He gathered experience in this area by writing original songs, playing in bands or writing songs for other artists.
Today, Stefan Artwin feels more like a composer than a guitarist, but this does not prevent him from playing guitar…