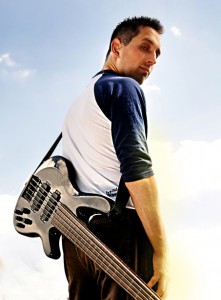 Michael Schetter was born under the name Michał Pruchnicki in Kowary, Poland. His musical training began with piano lessons around the age of 5, but his family’s move to Germany a couple of years later cut his career as a classical pianist awfully short.

It wasn’t before the age of 20 that he picked up an instrument again, this time the bass guitar. The main inspiration at that time was the amazing playing of Dream Theater bassist John Myung. To this day Michael plays his trusty John Myung signature model Yamaha 6-string bass, which, as he keeps emphasizing, he bought because of the great price (for a 6-stringer) and not because of the nice signature on it.

More recently Michael has been impressed by fusion-style players like Tony Grey or Sean Malone and the criminally underrated Tony Franklin who inspired him to pick up a fretless bass. Michael’s musical interests range from acoustic jazz and pop (but not the stuff you usually hear on the radio) to Meshuggah-level metal with a little bit of everything inbetween (just as long as it isn’t dull).