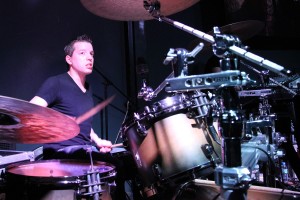 Frank Tinge was born in the Netherlands and started playing drums at the age of 16. At first, he was influenced by Mike Portnoy. In 2000, an earth-shattering and life-changing concert of Planet X shook up his world and opened his eyes. Musicianship on such a level was something he had never experienced before. Virgil Donati was his new idol.

He likes to listen to a lot of music, mostly in the progressive genre, but also any other genre, as long as it’s of good quality. Favourite bands of his are Planet X, Dream Theater, Symphony X, Frost* and Spock’s Beard. Frank is pretty much self-taught, although he did take a few lessons to get some hints and tips on his technique. He learned most of his skills by just listening to his favourite musicians and bands and playing along.